Is Science a Religion?

Science addresses itself as the antithesis of religion, both in its belief in an independent objective reality and its tendency to declare spiritual and religious practices and beliefs to be unscientific because of the lack of empirical evidence and a rational mechanism.

Nevertheless, science in may ways behaves as if it were a religion. This article examines science under a religious and philosophical lens.

Einstein in 1947. Albert Einstein is an iconic figure of the 20th century. Although many have claimed him on both sides of the spiritual versus mechanistic view of the universe, he ultimately believed in a revelation through science. Nevertheless, he attributed many of his insights as emerging from a place deep within.

Science is Definitely a Philosophy

Without a doubt, science is a philosophical system. There are still remnants of this in the granting of the PhD, a doctor of philosophy.

In many ways, modern science as a philosophical system is not new or unique. There have been prior systems of thought and approach that are similar.

For example one of the six main branches of Indian philosophy dating back at least 2200 years is Vaisheshika school of philosophy, which held that the universe and the physical objects around us were ultimately composed of atoms.

Like modern science, this system dismissed non-objective sources of information, maintaining only observation and inference as being valid.

On the other hand, the Vaisheshika system maintained the validity of the inner reality as the ultimate source of the outer reality. This significantly differs from modern science, that maintains an outer objective reality as the primary source.

One way of looking at modern science is to consider it as having started not unlike the Vaisheshika school with scientists such as Newton, Galileo and Kepler, who maintained a strong inner spiritual scientific stance, and that this inner science was later discarded to become the stance of science today.

Does Science fit the Criteria of a Religion?

Science definitely behaves like a religion. It does not follow the classic definition of a religion, until we dig a little deeper. 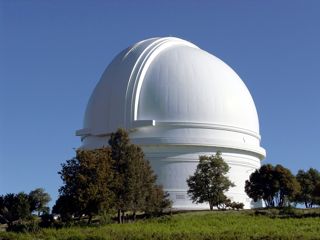 The 200 inch Hale telescope at the Mt Palomar Observatory was completed in 1949 and has since been an icon of astronomy's exploration of the universe. 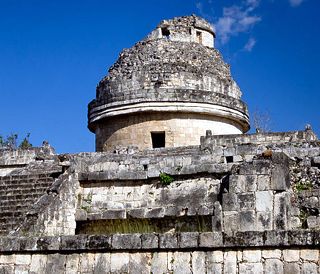 The Mayan observatory at Chichen Itza in the Yucatan peninsula reaches back one and a half millennia. With its internal spiral staircase and observation windows it is purported to have been used to time the movements of the planets and maintain the Mayan Calendar.

In wikipedia's article on religion, the word religion is shown to be used interchangeably with faith and belief system. The article continues with the following quote in defining religion:

“Many religions may have organized behaviors, clergy, . . . adherence or membership, holy places, and scriptures.”

It does not take a lot of imagination to see that in a similar fashion, science has organized behaviors called research and reproducibility of results through further research, and certainly, scientists form their own class that requires advanced degrees that demonstrates a candidate's adheres to scientific principles, and opens the doors to do work in laboratories and participate in research journals.

The article goes on to add more detail in describing religions in general:

"Many religions have narratives, symbols, and sacred histories . . . to explain the meaning of life . . . the origin of life or the Universe."

Again, with a bit of imagination, we can substitute narratives with text books, research journals and university courses. And of course we can add mathematics as well as scientific constructs, theories, equations and descriptors that have become science's symbolic language, to the extent that it is often incomprehensible to laymen.

Science is inventing its own Sacred history

Of course, a great deal of interest and money is being spent investigating the origin of the universe, and the unification of the physical forces and theories that describe the universe. We need not look any further than the construction of the Large Hadron Collider, and the recent search for the Higgs particle, ironically proclaimed in the popular media as the search for the "God particle".

On the other side of the scientific spectrum, is the research focused on recreating life, and showing the path of how the components of life would have formed from simpler molecules.

A mythology has grown around the origin of science.
That mythology or story begins with a stone age, and the beginning of civilization only a few thousand years ago. This story continues with the Classical Greek civilization as the root of modern scientific thought, with names such as Galen, Archimedes and Hipparchus.

The central theme of this story is the emergences of an objective and mechanistic description of reality as the hero that has resurrected humanity from superstition and the stone age.

In support of this story, much that would contradict it has been ignored, re-written or dismissed. Thus, to conform to the story, much of the achievement of astrology, in its technological innovations that included mechanical devices such as the antikythrea mechanism, and ancient differential calculus found in the Vedas of India, are now ascribed to archeoastronomy, even though astronomy is only a few hundred years old.

A Closer Look at the Religious Nature of Science

Aside from the article in Wikipedia, when we look up the word religion in various references and dictionaries, we arrive at a fairly consistent list of qualities that define or describe religions in general. Let us take a look at these qualities in turn, and see if they fit what we know of science today.

The Qualities of a Religion:

An Institutionalized system of attitudes, core beliefs and practices.

Many religions begin from spiritual roots. Over time the beliefs and practices are codified, become established, and the proper attitudes become taught and maintained.

Science is very much an institutionalized system that is taught in universities. It maintains the attitude of discovering the 'truth' or underlying principles. It has clear practices and beliefs such as the scientific method of inquiry and experimentation.

Many religions have gone through the process of removing internal contradictions and offshoots that did not conform to the central beliefs or to the central authority. Science maintains adherence to the scientific method, through a number of vehicles.

The ability to add to scientific knowledge and to be recognized for the contribution, requires anonymous peer review from scientists that are in the same field, before a research paper is accepted. When evidence is later found that the research or its write-up did not live up to the standards that are imposed, it may be retracted, and if the paper came out as part of graduate work, the degree may face being revoked.

We often hear of the sacrifice that scientists are willing to make in order to advance science. Many have labored for years to find cures for various diseases, or have become part of a much larger team that investigates new phenomena. Hundreds of scientists cooperated in the research, much of it painstaking work on the results from Large Hadron Collider, that gave evidence for the Higgs particle. 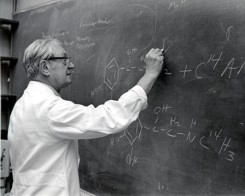 Scientists are often depicted doing their science in white lab suits, regardless of the functional use. In that sense they are very much distinguishing robes that identify a scientist to the public.

This one is fairly obvious. Scientists are imagined as walking around in white lab coats, and often they do. White of course symbolizes purity and the pursuit of the truth, and this is very much in line with what most scientists seek.

White lab coats are practical when working in environments where it is important to notice if contamination of clothing has occurred, or if something has been spilled such as chemicals or bio-active, radioactive liquids. It also is a way to minimize contamination from our street clothes to the laboratory.

Where white robes of course make little sense are those scientific environments where they have no practical purpose except for the sake of wearing distinguishing white robes. We often find this in physics, electronics, computer science, and of course, when photographs are taken for newspaper and journal articles.

A belief in a higher power, a deity or central organizing principle

One could easily argue that science has made itself its own god, its own deity, its own organizing principle. Most scientists today believe that science will ultimately unify an understanding of the universe around us. In physics, for example, there has been the rather expensive search for that unifying principle by trying to bring together all of the forces: gravity, electromagnetism, the weak nuclear and the strong nuclear forces. There is also the attempt to unify these with quantum theory into one series of equations

A particular system of faith

Most scientists have a profound faith in science and the scientific method. Many, have believed that ultimately, science reveals the hidden secrets of the universe, and that the ultimate reality is to become aware of its full inner workings. Einstein believed in the revelation of science.

The faith in science includes an objective assessment of reality that requires an underlying mechanistic and causal understanding of the world around us that is validated by statistic method.

Faith comes from trust in the scientific method

A simple way of describing the scientific method is that it is a process that applies a sequence of steps, procedures or general principles in a scientific inquiry. It typically has or is purported to have the following steps:

Formulation of the right question, based on previous scientific knowledge and an examination of the phenomena being researched.

Formulating a hypothesis or conjecture or educated guess as to the mechanism of action, followed by a testable prediction.

Experimental testing of the hypothesis and its prediction.

An analysis of the results, often using a statistic verification of the degree of confidence, followed by a conclusion of what was determined.

In a very real sense, it is trust that underlies faith. Science trusts a universe defined by causality, in one form or another. Non causal associations can not be tested in the traditional manner that identifies a mechanism for action.

This is one of the reasons that some scientists have had a difficult time trusting astrology, because astrology is not confined to causal mechanisms of action. Instead it is more closely based on relationships, and these include both casual and non-causal relationships. It therefore does not require a mechanism of action. This is its strength.

But for modern science, what does not follow out of causality or a mechanism is deemed to be outside of the scientific or rational universe. If a field of knowledge and its achievements resist being studied by traditional scientific methods, it is not science or its methods that are questioned, but rather that field of knowledge is questioned a priori. In this respect science also behaves like some religions have in the past.